I can remember five or six years ago feeling helpless to support the women in my life who were hurting. It was a time when I was birthing babies, and I experienced women close to me struggling with this. Women I loved were feeling the intense pain of miscarriage or infertility and having never dealt with this particular battle, I could only sympathize, not empathize. What I discovered, though, as I spoke with other women and mothers in my life, was that an overwhelming majority of them had experienced the same pain. Most women I knew personally had lost an unborn child, yet had never spoken of it until I broached the subject. I realized miscarriage was something women didn’t talk about. They kept that particular trauma to themselves. But I also realized that in sharing the struggle with one another, strength was obtained by those close to me.

It was something women didn’t talk about, and recently I’ve come across another struggle women keep to themselves. Why do we do that?

Here’s another thing women aren’t talking about, but I will. Be warned, fellas, and continue at your own risk.

After my third daughter was born I breastfed her like I did the first two. As an exclusive breastfeeding mother, and exactly like my previous children, I did not experience a menstrual cycle while nursing. I dealt with the hormonal changes of pregnancy, and then the ones of postpartum motherhood, but nothing was quite as hard as the return of the hormones related to my period. After [nine] months of no cycle, then another two years sans period, when I did stop breastfeeding and my period returned, it was with a vengeance. I mean, I had spent the last seven years of my life pregnant or breastfeeding. I assumed this would get better, that it would regulate, that I would feel normal again. And so began one of the hardest experiences of my life thus far. The worst part is that I have felt all alone in it. Like, I’m crazy. I’ve even described myself as such.

Around the time of my returning cycle, I also entered my [40s]. My reproductive body was starting to slow due to age, but the mother within there wouldn’t put it to rest. I imagined it like two, competing women within me. One was saying, “we’re done with this procreation business,” and she was trying to slow down my baby factory. Yet the other zealous woman inside screamed, “no, I’m not finished yet,” and she released a torrent of reproductive hormones. I found myself riding a roller coaster of hormones, with plunges and surges, ups and downs. I just kept telling myself it would get better. 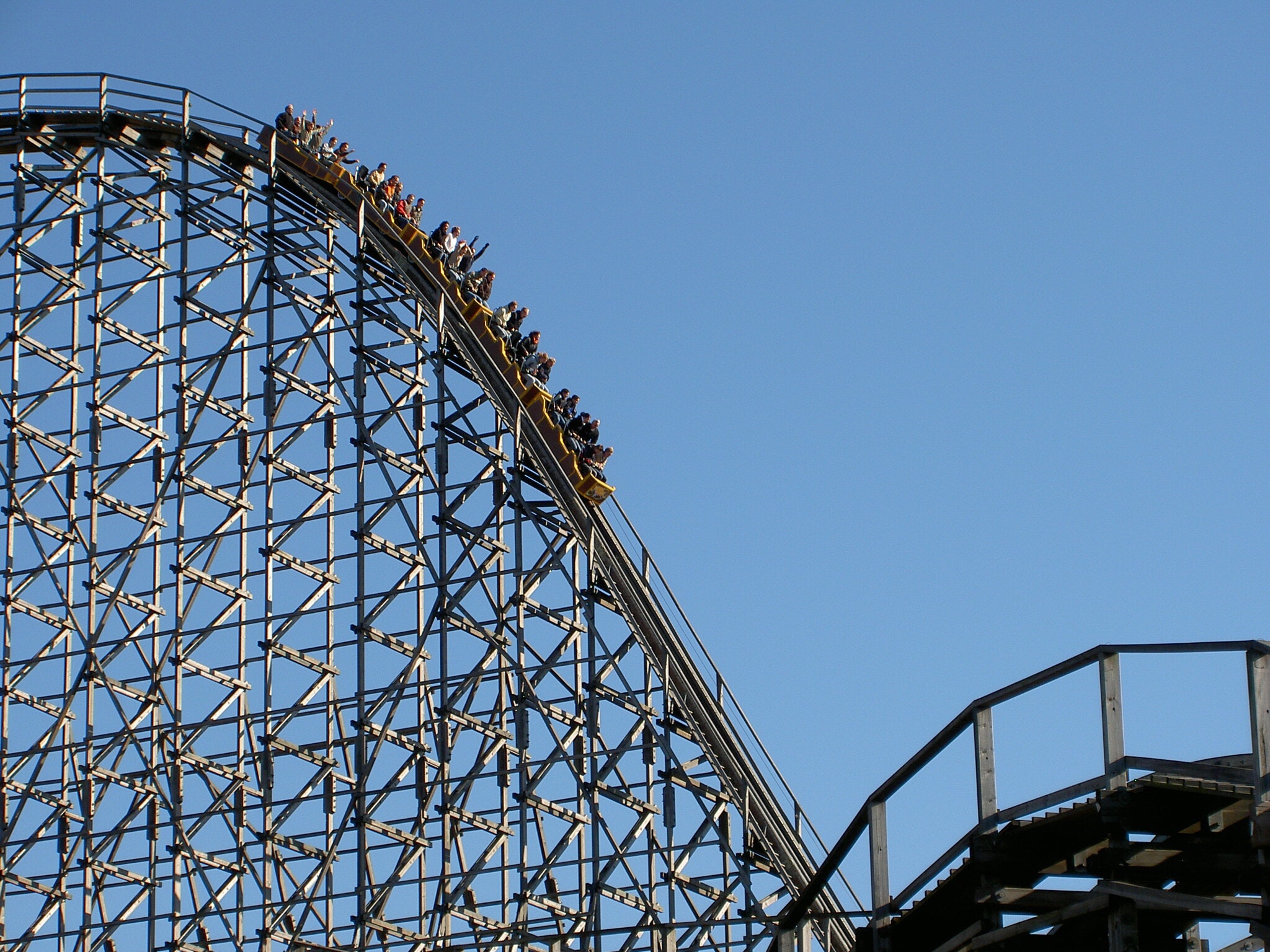 Over the past year and a half I’ve been waiting for it to improve, but instead of improvement, I’ve experienced upheaval. I’ve dealt with symptoms unlike anything I had ever experienced in adolescence, much worse, in fact. They followed a cyclic pattern so that I could pinpoint exactly where I was in my 28-day cycle, based simply on how I felt. When I was ovulating I’d have headaches, dizziness, lightheadedness, and nausea. I’d have pain and be prone to periods of rage. The week before my actual period I’d be an emotional wreck, crying five times within [10] minutes of a movie that wasn’t even sad. I’d have acne that was worse than anything I saw as a teenager. My acid reflux would get out of control, I’d be fatigued, swollen, and experience muscle strains and pains in my back and neck. Anxiety, insomnia, depression. PMS was the worst, and I’d actually long for my period, telling my husband that I wanted to “bleed my bad mood away.”

It seemed like with each week new symptoms came, month after month, and I only had maybe [five] days in 30 where I felt “normal” or like my old self. The actual period itself was worse, with cramps rivaling anything I’d ever known, ones that made me cry. It lasted longer, would wax and wane, stop, then restart. But I think it was my mental state that made it the worst. So many times I used the words “out of control.”

I felt out of control of my emotions.

I felt like no one understood this because no one talked about it. Was I the only woman in my forties who felt insane?

I started scouring the Internet, something as a Nurse I hated when patients did, but I had to do something that made me feel less alone. I found things that made me feel better, but that also didn’t. I realized women in their [40s] experienced these hormonal surges, ups and downs, as their reproductive bodies geared down. I discovered it was called a perimenopausal period, but I also found it could last [10] years or more! Was there any end in sight?!

For over a year I waited to see if it would improve, and when it didn’t I decided to finally bite the bullet and see my doctor. When I explained my symptoms at my appointment he didn’t seem surprised. I had never believed in PMS as a young woman, naively presuming it was an excuse women used to act nasty. Even as I spoke honestly to my doctor a small part of me worried if he’d feel the same, but I was beyond premenstrual syndrome; I was all-the-time syndrome.

I thought later about when he had suggested different medication options. One suggestion had been Zoloft.

“But I’m not depressed!” I had exclaimed defensively. “My life is wonderful!”

He had answered, “it doesn’t mean you’re depressed to take it. It can just help your mood to be regulated.”

A few days after this conversation I had the worst PMS of my life. Two nights before my period started I found myself fixating on a situation. I was worried that someone might be upset with me. The crazy part was nothing had happened, but I was worried it might. I was anxious about a nonexistent issue. And I couldn’t stop thinking about it!

I prayed and prayed. “God, take these irrational worries away!”

The next day I found myself in a “slump,” but that’s really a nice way of putting it. It was even beyond my typical description of “melancholy.” I was depressed, bordering on hopeless, and even had a very brief thought of suicide in the shower.

It wasn’t my first brush with suicidal ideation. I could remember two episodes prior where I had lay [sic] in bed thinking that my children didn’t love me or need me, that they would be better off without me. Thankfully, a thought of ending my life was only a fleeting one, mere seconds of contemplation, then pushed away by my rational mind. But the realization that they came at all frightened me. How could I think such a thing?!

If it wasn’t that then I considered running away, deserting a family that I felt didn’t appreciate me.

I guess they’d see how much I do if I was gone!

The truth always would shine through. It would tell me I was loved (and appreciated), by my family and by God. I guess that’s probably what bothered me the most. How could I (in my innermost being) know the truth, that I was complete in Jesus and loved, yet still feel this way? The two things didn’t gel, they didn’t go together, they didn’t go side by side. The truth of who I was didn’t coincide with my feelings. My emotions betrayed me. They threatened to upheave me. I was a happy, blessed woman! So why did I feel so sad?! That was the worst part. The truth of my situation didn’t change how I felt sometimes.

I called my doctor back!

In talking to other women, and ones older than myself, who had been in my shoes ([40s], multiple babies later), I realized I wasn’t alone. They had been through the same emotions and struggles. I don’t know why we keep these experiences so close and silent, but I think it’s because they scare us. They make us feel out of control. I mean, many years ago women suffered in silence, and the ones who did voice the roller coaster feelings were hospitalized, institutionalized, given electroshock therapy, separated from family, and heavily medicated into compliance. Perhaps that macabre history is why we keep our struggles close to the vest, unspoken, and swept under a rug.

Maybe it’s indecent or inappropriate for women to discuss out loud things like hormones and menstrual cycles! Like how breastfeeding still isn’t normalized, I guess neither is the struggle of being a woman. We go through the difficulties of carrying a child, the pain of childbirth, the struggles of the postpartum period, but it doesn’t even end there. It continues into this time of life that I’m now discovering, and I haven’t even gotten to the menopause part!

I wish it didn’t have to be so hard to be a woman, and I wish I knew the answers of how to make it better. But I don’t. I do know this, though. If anything I wrote sounds familiar to you then I hope it helps to know you are not alone in how you feel. You’re not the only woman who feels crazy, unbalanced, or out of control. Don’t be afraid to talk to someone about it, to see your doctor. Keep looking for a doctor who understands your situation and helps you find solutions. Don’t be ashamed of how you’re feeling, don’t be ashamed to get help, to find the right medicine.

Tonight I heard a song on the radio that sang, “I’m not okay, and that’s okay.”

I guess that’s my anthem during this season. Women always try to be everything, but it’s okay to admit you need help. I cling to Jesus and prayer, but God created knowledge which created medicine, and there’s no shame in that. Being out of control of your emotions doesn’t mean you’re a bad person or even a bad Christian. It just means you’re human. And I think it’s okay to talk about that.