This morning as I sat drinking coffee and watching a television preacher teach I was reminded of a story from the Old Testament. I found it mildly odd because it had nothing to do with the content the TV pastor went over, nor was it mentioned in any of the morning devotionals I had read. Yet there it was, and I smiled as I thought about the account of the twelve spies. Moses had sent 12 men to gather an account of what lay in the land of Canaan. When they returned after seeing the large, giant-like inhabitants of their Promised Land, they didn’t have much confidence in their chances of taking control there. In fact, 10 of the dudes were flipping scared. Only two, Caleb and Joshua, voiced certainty of the promise from God. They knew God would help them overcome the obstacles in their way.

Shortly after the television program ended I got ready for the day. I went and paid the month’s rent on our tiny cabin, and I went to the store for milk and bread, something we are always running out of in our family. After that, we got ready and went for a relaxing day by the pool. Before pulling into the parking lot by the pool my husband stopped to drop off some trash in the dumpsters, and I ran inside the activity center to check our mail. As I walked out with a few forwarded envelopes in hand I looked around for our truck. It was no longer by the dumpster so I knew my hubby had gone ahead and pulled into the parking lot by the pool house. As I looked in that direction I spotted our truck quickly but found it odd where he was parked. It was sitting in the middle of the driving area, a crushed, orange cone under its left tire, and a large delivery truck immediately to its right. Then I saw my husband walking quickly around the other side. I probed him with questioning eyes.

“I hit his truck,” he called to me across the lot, visibly shaken by the event.

Minutes later I sat by the pool with my girls, my mind turning quickly as I thought about insurance deductibles, and watching with concern as my spouse stood with the delivery driver on the phone to his bosses. My nerves felt frayed and I could only imagine his own as the driver took photos with his cell phone. As I worried about the damages my own phone rang, and it was a call from the woman at the park’s office who had taken my large, rent payment an hour before.

“I’m sorry to bother you, and I should have mentioned it before, but it’s our policy if you stay for any length of time in our cabins that you pay a $500 security deposit,” she explained. “So I’ll need to charge you for that.”

I remembered specifically paying the deposit when we first joined their membership and I told her such. As she answered back she only saw the $200 reservation deposit and not the other, my 5-year-old began doing the peepee dance. I strained to hear the woman on the phone as my middle child screamed “I gotta go bad,” and my toddler cried bloody murder that I had to rip her from the pool to head to the restrooms. So even though I knew I had a receipt for the previously paid deposit, the whole, interrupted conversation coupled with my already frayed nerves left me feeling anxious.

I felt like I wanted to cry, and after I returned from the bathroom I almost did just that as I called out to the Lord in earnest.

“I trust you. In all situations, I trust you,” I prayed.

I thought not just of the current problem at hand, but the many we had faced over the past six months. A failing business, financial hardship, an unknown move and job change, housing issues, and so much more. Throughout it all God had remained faithful to us. He had opened doors, closed doors, comforted, and provided. He didn’t take the obstacles or problems away, but He helped us navigate them.

As I thought of His ever-present faithfulness in the past, the twelve spies occurred to me again.

Do you see giants?

I felt the question impressed upon my spirit, and I knew it was always easy to focus on the giants (or the hardships, problems, and obstacles). But I also knew that when you focused on the giants you forgot about the promise. God had promised us a future, and I knew that even if the world gave me a problem that God could use it for our good. I asked the Lord to give me peace, and then I made the conscious decision to rest in His goodness. 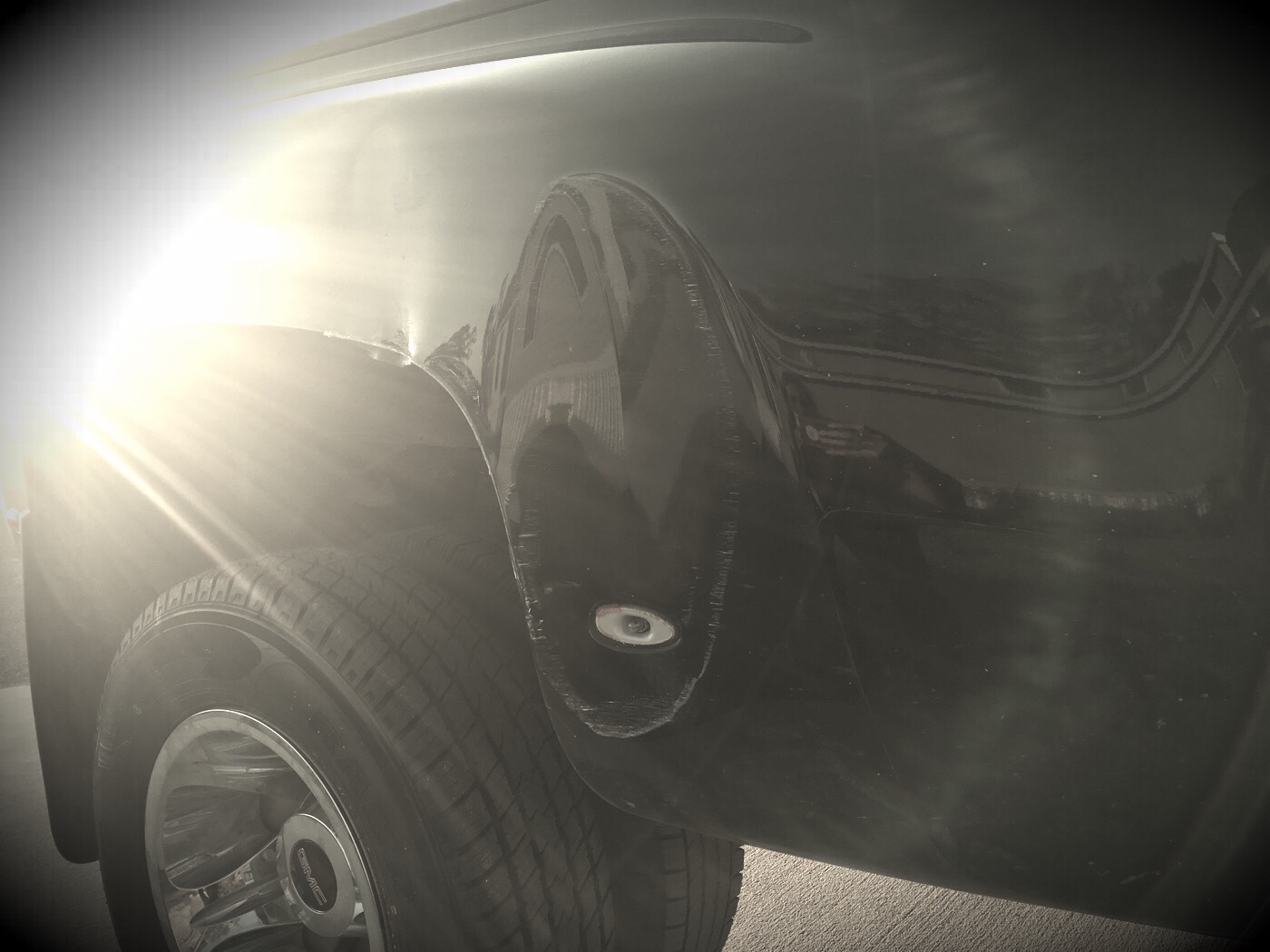 I watched Ben as he assessed the damage to our truck. He had just told me that aside from the dent in the side, scuffed paint, and busted light, that the tire was flat. Seems that the tailgate of the delivery truck had punctured the sidewall of our ginormous truck tire. I strove to not see dollar signs and instead rest in God’s peace, but minutes later I received a message from home that could cause us further financial distress.

I responded to the message in a calm manner and with wisdom as the Lord directed me, and the sender and I both ended up being blessed by the interaction.

The woman at the RV Park Office found the record of my payment and apologized profusely. Our rent also ended up being cheaper than the previous month.

Because we had never changed a tire on a dually and our spare wouldn’t last long term anyway we opted for a mobile tire service to come and change it out with a new tire.

Of note, there’s no better place to wait for a flat to be changed than poolside.

The tire ended up being much cheaper than we anticipated.

We had already bought the tire, but as the guy changed it with my husband he stated, “you guys were an accident waiting to happen!”

Turns out the tire was very bare, and it also had a broken off nail sticking out of it. It was a blowout waiting to happen. As we discussed it later we felt quite certain that this incident with the tire prevented a possible worse one at high speeds in the future.

Although our truck got a pretty good ding, miraculously there was zero damage to the delivery truck.

As we later walked to our truck with a brand, spanking new tire I looked at the crystal blue sky and thanked the Lord for another wonderful day. Today was just a little bump in the road in the grand scheme of life, and it was a great reminder that though we’ll encounter giants across our path, that doesn’t mean we have to see it that way. God’s promises in His Word always overshadow the problems we face in this world. And it’s okay to need reminding of that from time to time.

Causes
Mom Gets Bad Feeling as 3 Strangers Stare at Her 2-Yr-Old— When She Hears “Say Bye to Mommy,” She’s Gutted
November 16, 2021
Parenting
The Last Thing He Said to Me Was, “I’m Ok Mom, I Love You Too:” Mom Warns Parents After Son’s Tragic Death
November 15, 2021
Causes
10-Yr-Old Spends Birthday in Hospital After Suicide Attempt, Mom Is Laughed & Cursed at by Parents of Daughter’s Bully
November 16, 2021
Relationships
Husband Is Asked if He’s Bored of Being With His Wife of 10 Years—His Response WINS The Internet
November 15, 2021
Browse