The football star tragically lost his mother, Sandra Hill, to the disease in 2014. She was just 53 years old. 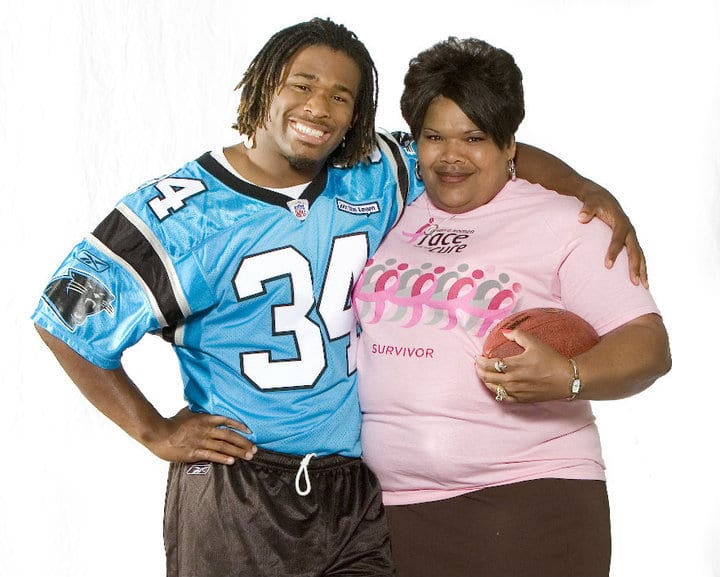 DeAngelo has also lost four aunts to breast cancer, all before the age of 50.

In honor of his late female family members, the 36-year-old began serving women across the nation by paying for their mammograms through his nonprofit organization, The DeAngelo Williams Foundation.

He called it the “53 Strong for Sandra” program.

While playing football for the Carolina Panthers in 2014, DeAngelo launched the initiative in partnership with Charlotte Radiology and Levine Cancer Institute to provide free mammograms and follow-up care to 53 women in the area.

53 being a “significant number” because that’s how old his mom was when she lost her decade-long battle with breast cancer.

Since he began the initiative five years ago, DeAngelo and his foundation have paid for more than 500 mammograms at hospitals in Pittsburgh, Pennsylvania; Memphis, Tennessee; Jonesboro, Arkansas; and Charlotte, North Carolina, according to TODAY.

And they have no plans of stopping. DeAngelo says he hopes to host a free mammogram screening event in every state.

“To be able to help all these women is amazing. This can be life-changing for these women,” DeAngelo says of his foundation’s accomplishment. “We are enabling them to get this care that no one should ever be denied or not have access to.”

This is dedicated to my mom, my aunts & women everywhere affected by Breast Cancer. I love you. #WeAreInThisTogetherhttps://t.co/bAwaanlfzV

October is National Breast Cancer Awareness Month, and there’s never been a better time to check your girls. Statistics show that 1 in 8 women will suffer from a form of invasive breast cancer in their lifetime. Early detection is key.

Causes
Mom Gets Bad Feeling as 3 Strangers Stare at Her 2-Yr-Old— When She Hears “Say Bye to Mommy,” She’s Gutted
November 16, 2021
Causes
10-Yr-Old Spends Birthday in Hospital After Suicide Attempt, Mom Is Laughed & Cursed at by Parents of Daughter’s Bully

Parenting
I Slept With My Mother When I Was 16—& I Have Good Reason for Letting My Kids Do the Same
November 18, 2021
Relationships
6 Ways to Make Your Wife Feel Ugly Without Saying a Thing
November 17, 2021
Browse