A 10-year-old from Georgia is being hailed a hero this week after her quick thinking saved her toddler sister from drowning.

Jayla Dallis (10) and her little sister, [3]-year-old Kali Dallis, were swimming at the pool of the Chamblee apartment complex on May 15.

Surveillance footage from the apartment complex shows Kali walking into the shallow end of the pool with an inflatable device around her waist. As she jumped off of one of the top steps, the momentum put her head-first into the water, causing her to body to be stuck upside down in the inner tube.

In the video, Kali is able to escape the inner tube, but the water was too deep.

“She was, like heavy, so I had to pull her by her hair, and then I grabbed her by her waist and pulled her up,” Jayla told Good Morning America.

Once pulled from the pool, the girls’ aunt along with a staff member of the apartment complex frantically administered CPR, while another witness called 911.

Police sergeant, Ed Lyons, received the call and rushed to the scene. The father of a little girl himself, Lyons says he felt particularly connected to the case.

“I saw my little girl laying there, same kind of little bathing suit she wears,” Lyons told WAFB-9. “Same little hair pulled up in a little bun up top. You know you kind of have to push past that and do what you’re trained to do.”

The most harrowing part of those statistics is that it’s completely preventable.

According to new guidelines from the American Academy of Pediatrics (AAP), children should learn to swim at the age of one.

“Research has found that swim lessons are beneficial for children starting around age 1, and may lower drowning rates”, said Dr. Linda Quan, a co-author of the policy statement.

“Learning to swim is a great family activity,” she says. “Families can talk with their pediatrician about whether their child is developmentally ready for swim lessons, and then look for a program that has experienced, well-trained instructors. Ideally, programs should teach ‘water competency’ too — the ability to get out of the water if your child ends up in the water unexpectedly.”

Of course, even the best swim lessons cannot “drown-proof” a child. The AAP recommends parents take steps to make a child’s environment safer — especially around any sort of water, from swimming pools to bathtubs, as a toddler can drown in less than a minute.

Experts suggest that if a child is not fully able to swim and is in the pool with an inflatable device, the parent or guardian also needs to be in the pool within an arm’s reach from the child.

As for Kali, who was rushed to the emergency room in critical condition, it’s her big sister’s quick rescue that led her to a full recovery. The toddler spent two weeks in the hospital before being released Friday.

The girls’ mother, Daneshia Dallis, says she feels incredibly lucky to be able to take her daughter home.

“I’m fortunate to get to take my baby home after two weeks,” she said.

Daneshia, who wasn’t at the pool that day, said she got a call from her sister to come to the hospital’s ICU. It was there that she watched the surveillance footage of her older daughter’s heroic actions. She says she knows Kali may not be alive today if it weren’t for Jayla’s quick response. The 10-year-old even started performing CPR before anyone else reached Kali — which she says she learned on TV.

“As a 10-year-old, to think about all of that in a traumatic situation, I’m so proud of her, I don’t even know what to do,” Daneshia said. 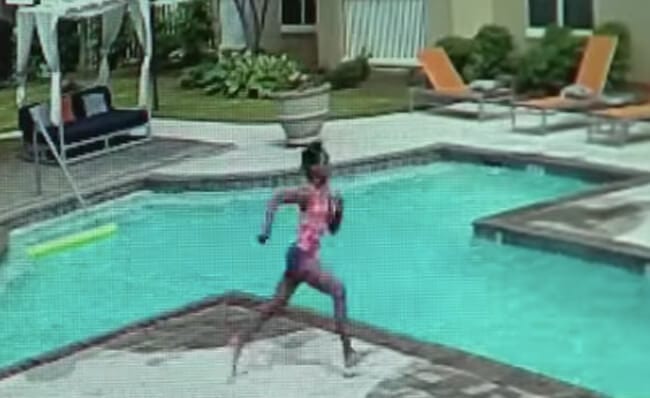