The weight of my story begins in high school when I was prescribed [painkillers] for my wisdom teeth at age 16. I didn’t develop [an] addiction to the medication right away. It wasn’t until a couple years later when the heaviness of my heart got too hard to hold and I remember the instant happy pill I used to take for my teeth. Those pills just so happened to be all over the streets around Houston, where I lived. I grew up in a wonderful home with awesome parents and family. I spent time in church every Sunday and I made good grades and stayed out of trouble. However, addiction does not discriminate. I even knew to be cautious of taking those pills, but it still got me. I realized quickly when I became dependent on those pills and immediately was on the search for recovery. Terrified of their reaction, I told my parents I needed treatment. They had no idea and were probably scared to death and not really clear on what to do with me. I got checked into a detox facility followed by an outpatient rehab program. I was happy and it worked. So, I thought.

A few months went by and those little pills showed up in my life as they often did. But this particular day I decided I would just take a couple because it was super bowl day. The slippery slope took me down so fast I had no idea what hit me. [Four] years later I was still taking pills but now crushing stronger ones and snorting them in the bathroom at work. Who was this person? I did not recognize her, but I was stuck with no remedy. I tried all kinds of things to help myself. Prayers, AA, new commitments, other medications, countless ‘last days’ and painful withdrawals over and over again. Nothing worked and I was hopeless. I cried all the time, recognizing there was no way out because I had tried everything. I researched different solutions and sometimes I could get sober on my own willpower. But it never lasted more than a few weeks. I was always on the lookout for what to try next. I was a prisoner in my own body and drug addiction is frowned upon by the world. I was alone and desperate. The only people that understood were other addicts, and they weren’t helping matters. They were stuck too, but they didn’t even know it. 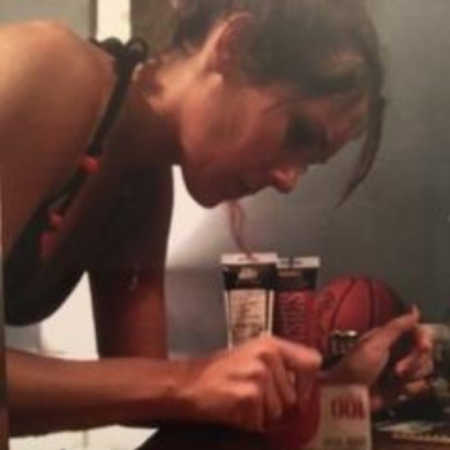 One day I met a customer at work named Dee Dee. She invited me to her weekly [B]ible study at her house. I wasn’t about to go by myself to this stranger’s house and feel awkwardly out of place. But I saw on my friends Facebook wall an invitation to Dee Dee’s [B]ible study. I took that as a sign to get my ass there because that couldn’t be a coincidence. The girl that invited my friend to Dee Dee’s had just broken up with her boyfriend so she needed a new partner to go with her. I found myself there; at [B]ible study. At this divine appointment, God used Dee Dee to speak to me in ways I could finally comprehend. I didn’t agree with everything right away, but I could understand the concepts taught to me that I never absorbed from the church growing up. When I left, I got in my car and prayed. Overwhelmed by everything I needed fixed in my life, I didn’t know what to say to God and wasn’t sure he was even listening. So, I just cried ‘God?!’ Tears poured down my face. ‘Just take my whole life. I can’t handle any of it anymore. If you are who you say you are, now is the time I’ll let you have complete control of my life.’ And in that moment, God showed up.

I physically felt an enormous weight lifted off my shoulders, freeing me from my emotional turmoil. I surrendered and it was a high that no amount of drug could ever reach. I experienced just a piece of Heaven and the peace of Jesus. I had to pull over and weep. It was the moment God finally responded to me after all my years of praying. My eyes were opened and now I could see God in everything. I was hooked, so I chased that spiritual experience and God took care of the rest. Two weeks later I got the [heartbreaking] call that one of my best friends died from an overdose. Being a baby in sobriety, this was a dangerous scenario for me. An excuse to say ‘F’ it and relapse. For the first time in years, I was feeling all of my emotions instead of numbing them. God carried me through that with flying colors. I stayed sober while all of my friends were on drugs and alcohol around me grieving the loss of our amazing friend Andrew. To this day, I don’t know how God did that.

Fast forward to the next year and I’m back on drugs worse than before. Sorry to bust the sobriety bubble, but this is addiction. I was disappointed too. It’s a long learning experience on what not to do. I thought I was cured and then learned it’s an incurable disease. So, there I was, face planted in my Bible trying to get myself out of that hell hole once again. The hopeless feeling was there more than ever. I hysterically cried all day, the day I realized there was no way out. I was all about God, why was he not helping me this time? I remember thinking I will never be married, I will never have a baby and the life I dream of because I can’t stay sober. 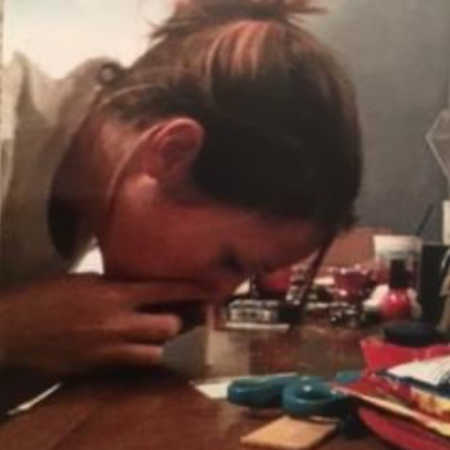 I broke down to God again. The very next day at work, I met Jenny. She nonchalantly told me she had cancer and was supposed to die in April. I continued working and tried to process what she just told me, and I realized the day was April 16, 2013. ‘It’s April now!’ I blurted out at her as if she didn’t already know. She said in her calm and matter-of-fact voice, ‘I know, God is doing something. I felt good today, so I decided to come in here.’ We continued to talk about God and I revealed to her my addiction that I couldn’t kick. Her face lit up when she told me she was a recovering alcoholic who had been sober for 10 years. We both knew why she came [into] the store that day. She prayed for me on her knees, holding my hands, in front of other customers. It was awkward and amazing at the same time. Why did she want to pray for me when she was the one dying? She became my sponsor that day and dragged me to an AA meeting. I did what she told me to do. I then had God as my priority AND a recovery program and I have found that it is still working. I found freedom and a way to accept life on life’s terms no matter what circumstances were happening in my life. God used Jenny to save my life before He brought her home 8 months later. My next sponsor became Jenny’s good friend, Lauren, who helped me continue my sobriety journey. I am forever grateful for God and AA for breaking my chains of bondage to that life-sucking chemical.

Since my life was completely new, my previous relationships weren’t working out. I was growing at a rapid rate spiritually and it was pulling me away from the people I loved still trapped in addiction. But I couldn’t stay there. It was uncomfortable to leave the life I had but I wanted so much more. And then I met Wes, who swept me off my feet and loved Jesus as much as I did and understood the miracles that He performs. He lived the life I lived, and it was easy. Remember the girl from earlier that broke up with her boyfriend and invited my friend to Dee Dees? That’s the reason I even went to [B]ible study and found God years ago. That boy was Wes, who I met later in recovery and is now my husband.

Now that I was sober, I could work on that family I always dreamed of. On December 16, 2015, I wrote a prayer for a baby boy and put it up in my prayer closet. The next year on that very same day December 16, 2016, I found out I was pregnant. It’s a boy! We were so excited for this journey. Unfortunately, at 26 weeks we found out the baby stopped growing. The doctors told us he had a genetic disorder, but we needed to wait for the results to see how bad it was. The next few days found us in the hospital because I had severe pre-eclampsia. The doctors said the baby was too small and would not live due to his size. Typically, early preeclampsia patients have their babies within [two] weeks. We hit our knees and prayed our guts out as we were paralyzed with fear. We knew [two] things: our baby wasn’t going to live, but if he did, he had a genetic disorder. There was no good news and I was stuck petrified in the hospital with only time to think about the bad news.

But thankfully, in AA’s 12 step program I had learned acceptance and trust in what God wanted to do. I needed him to hold me together. I wrote all over the hospital walls with chalk markers. Scriptures covered my room. The Holy Spirit was there through every blood pressure check, every needle poked in me, and every negative thought that passed through my mind. We just needed to keep the baby in long enough for him to be big enough to survive. [Six] weeks later, still no baby. One morning, just like usual, my room filled with Doctors and residents and interns like a scene from “Grey’s Anatomy” (which we watched religiously in the hospital and still do). At that moment the genetic counselor calls, I anxiously pick up the phone and the room full of doctors gets silent. I put her on speaker to read my results to all the doctors so they are prepared for whatever genetic issue my son will have. ‘NO GENETIC DISORDER.’ I lasted another week which meant I was able to get a second dose of emergency steroid to grow my baby’s lungs. Christian James Farris (CJ) was born on July 3, 2017, at 1 pound 15 ounces. 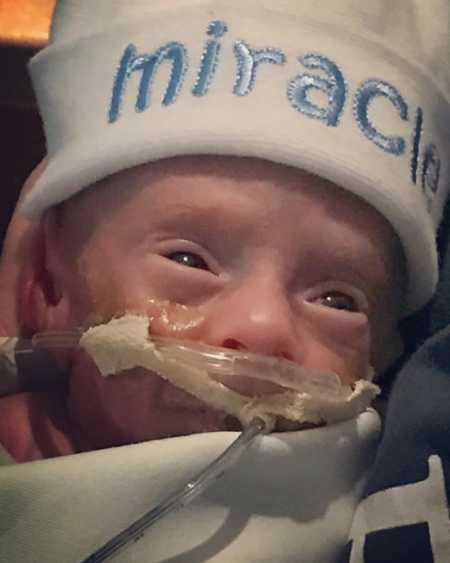 He stayed in the NICU for over [three] months to grow. 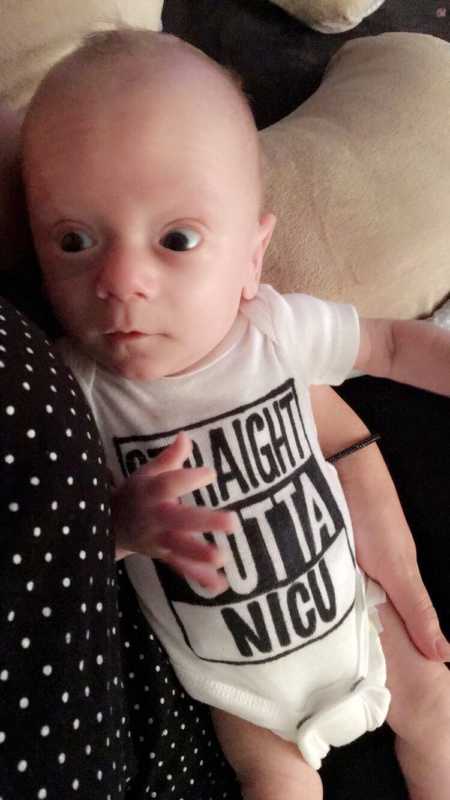 Wes and I got married in the hospital chapel with our closest friends and family. Little CJ got to come out of the NICU to be the tiniest ring bearer in history. 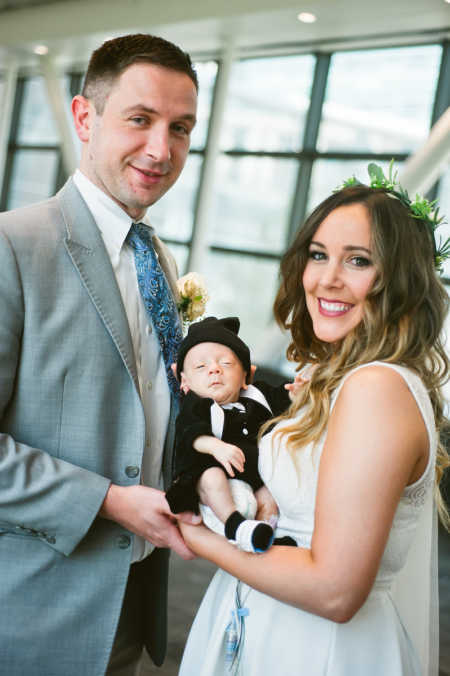 His amazing nurses brought him in a little wagon with all his tubes and machines in his preemie tux. It was the perfect day. He is now 18 months old with no preemie problems whatsoever. He is a walking miracle. 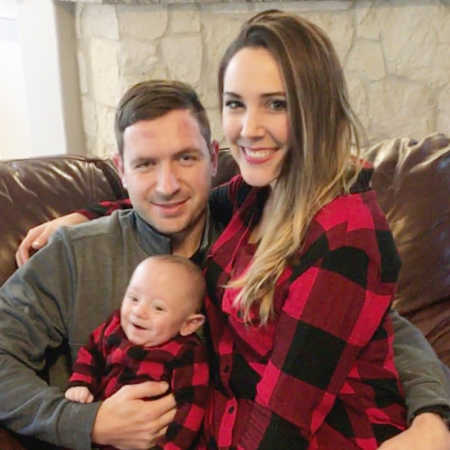 My dreams have come true and I couldn’t ask for anything more.

**This story was written by Whitney Belaire and originally appeared on Love What Matters. Used with permission.

Inspirational
To the White Parents of my Black Son’s Friends
May 29, 2020
Relationships
“Every Day She Tags Me in Stuff on Facebook. Every Day.”: Husband Ignores Wife Tagging Him on Facebook. Now He Wishes He Paid Attention.
May 28, 2020
Relationships
7 Ways to Guard Your Marriage When Preparing for Parenthood
May 12, 2020
Inspirational
“Every Week, They Wanted Me to Abort. Did They Get a Prize for ‘Selling’ Me On An Abortion?”
May 28, 2020
Spiritual
33 Verses about Fear & Anxiety That Remind Us God is in Control
May 21, 2020
Parenting
Dear Daughter, Don’t Apologize
May 29, 2020
Browse