A kind-hearted New Jersey woman was in for the surprise of her life at a local Wawa this week when she paid for what she thought was a struggling man’s cup of coffee.

It turned out, that man short on a few dollars cash ended up being country legend Keith Urban.

My favorite story of the day is how my 3rd grade teacher thought @KeithUrban was down on his luck and couldn’t pay for his wawa snacks so she bought them for him. What an angel. pic.twitter.com/mJccVOQWtp

And this isn’t the first time the retired elementary school teacher has helped a person in need. In fact, she makes a habit of treating someone once a week at that exact same convenience store.

“For three years, I have made a resolution to once a week treat someone at Wawa,” she wrote on Facebook. “Occasionally it happens more than once a week.”

“This man was short a few dollars,” Ruth continued. “He asked a lady with him if she had money.”

That’s when Ruth jumped in to save the day for what appeared to be a stranger down on his luck:

“I jumped in and said I would pay and explained why. He thanked me and asked my name. I asked him his and he told me it was Keith. I said he did look like Keith Urban, he said he was. I didn’t believe him, I asked where Nicole was and who was the lady. He told me it was his sister. He finally said I could ask his bodyguard. It was then I realized what an idiot I was. He graciously allowed me to get my picture taken with him. Another Ruth Reed moment!” 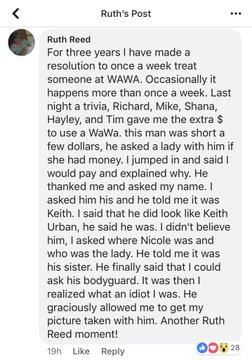 Kudos to this wonderful woman for her generosity and for making the world just a little bit brighter each week by helping those in need–EVEN when it comes to helping out a country music star.

See more from this heartwarming story in the CBS This Morning interview below:

Spiritual
My 3-Year-Old Told Me Why God Took So Long to Give Me a Baby—And She Was Spot ON
January 12, 2021
Spiritual
Dads, Take Your Kids to Church!
January 21, 2021
Spiritual
The Worst Consequence of Skipping Church
January 20, 2021
Relationships
The One Promise Made at Weddings That NO Husband Can Keep
January 25, 2021
Relationships
6 Surprises I Wish My Premarital Counselor Covered
January 26, 2021
Parenting
EMT Mom Pleads Parents to Tape 5 Pieces of Life-Saving Info to Your Child’s Car Seat
December 10, 2020
Browse