Something very strange happened to me after my third child and as I entered my forties. My worry and anxiety skyrocketed! I mean, I’ve always been an over-thinker, and I’ve also always had a propensity to angle for control of a situation. I like ducks in a row, I like knowing beginning to end, and I like smooth sailing seas. That’s always been my personality. But it has gotten worse over the past couple of years. If I had a conflict with another person I found myself agonizing over it for days, and the tendency to create problems out of thin air became ridiculous. In my mind, I could concoct worst-case scenario like nobody’s business. I became a professional worrywart.

Well, let me tell you something about that. It’s exhausting! I felt like I was going against the grain of who I am as a Christian. I would read all kinds of Bible verses talking about trusting the Lord, but then I’d keep myself up at night with legitimate concerns and made-up problems alike. I would pray without ceasing for God to help me with an issue, but I couldn’t cease worrying if He would. It was a vicious cycle of surrender and anxiety that left me feeling very deflated. I was tired of being afraid, and I told the Lord as much. Over the years I have spoken scriptures regarding fear over myself, and they’ve helped to dispel incapacitating worry from my life so that I could proceed day-to-day, but I still battled with it regularly. It was like a cross I had to bear and die to self about daily. I’m not exactly sure what shifted, but I do recall not too long ago when the Lord spoke His Word to me so strongly that I felt a change deep inside my heart.

“There is no fear in love.”

That’s what He spoke to my heart as I stood in the kitchen of my RV. I spoke the rest of the verse from 1 John to myself. Because perfect love drives out fear. It was at this moment that like a lightning bolt the truth of this statement took hold. His love resides in me. Therefore there could be no fear. It just wasn’t cohesive. I prayed about it long and hard. At the time we were located at an RV park near a patch of woods, and I just felt like I was supposed to leave my fear right there. I felt kinda silly, but I threw on some shoes, walked outside, stared at those woods, and I symbolically laid down my fear on the forest floor. The name of the park had “Cross City” in its name, and I told the Lord I was gonna leave my fear right there at the cross. And that’s what I did.

I’ve had a lot of issues come across the board of my life since that day, and I’m not going to lie and say some of them haven’t caused me concern. They have. Take for instance the recent hurricane that’s currently hitting the coast of the state I’m living in. Watching people evacuate the area, my hospital put into effect emergency policies, and of course, the very dramatic news reports would make anyone a little uneasy. We are, after all, living in a fifth wheel trailer. They’re not known for being the most stable abode, and this would be our first storm in one. Thoughts of leaks and so much more came to mind! Yet despite my legitimate concerns, I couldn’t stay worried. I realized I wasn’t afraid. 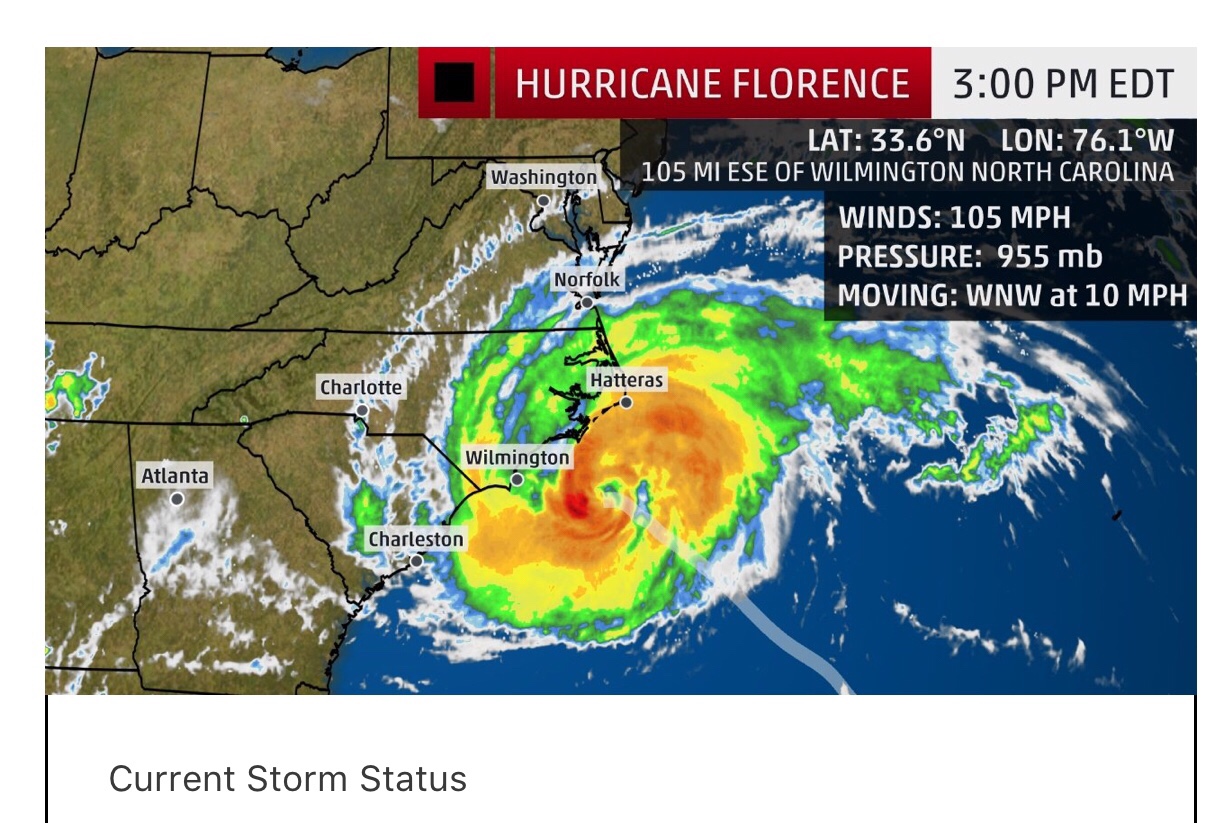 Friends and family began reaching out to me in large numbers. I realized my dear friends and family were more worried than I was. It wasn’t that I was being blasé or having Scarlett O’Hara syndrome. I was watching the weather. We even had a couple of evacuation and relocation plans in place if need be. It wasn’t like we were being irresponsible. It’s just that more than fear [of] a storm, I felt peace. I felt a very deep and very steady peace flooding my spirit. I couldn’t be afraid of this storm no matter how hard I tried. My husband felt the same way, and as he sent a photo of a double rainbow he took over our RV Park, I realized I only felt certainty that God would keep a hedge of protection around us. 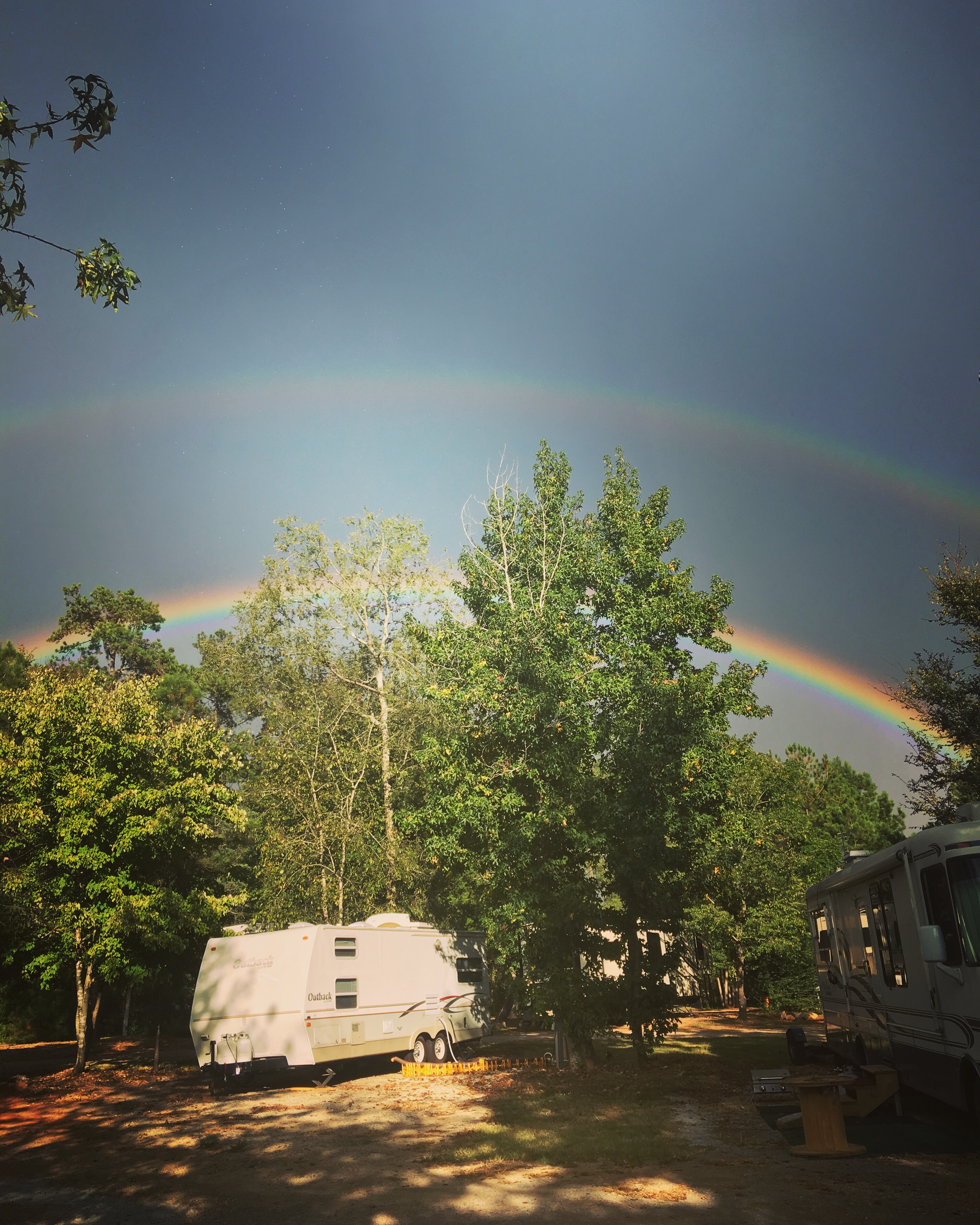 For the record, we’re not on the coast, and if we were I would be on a higher alert with immediate evacuation in mind. But I still would not be afraid. And I’m not afraid now. I just can’t be, no matter how hard my human mind may try to be. We’re staying put unless the Lord gives us the wisdom to go elsewhere. I trust His ability to lead us to safety if need be, and I trust His protection over my family. Even if He took our lives in the storm, I would trust His will. I’m not afraid of death. If there’s anything that would make me afraid, it’s a life lived without His perfect love to drive out fear. I’m not naive. I know this imperfect world brings situations that will absolutely usher in things worthy of being scared of (like an intruder with a gun, a missing child, or a hurricane). But I also know I have the choice at that point to hold tightly to that love that exists within me. For there is no fear in love.