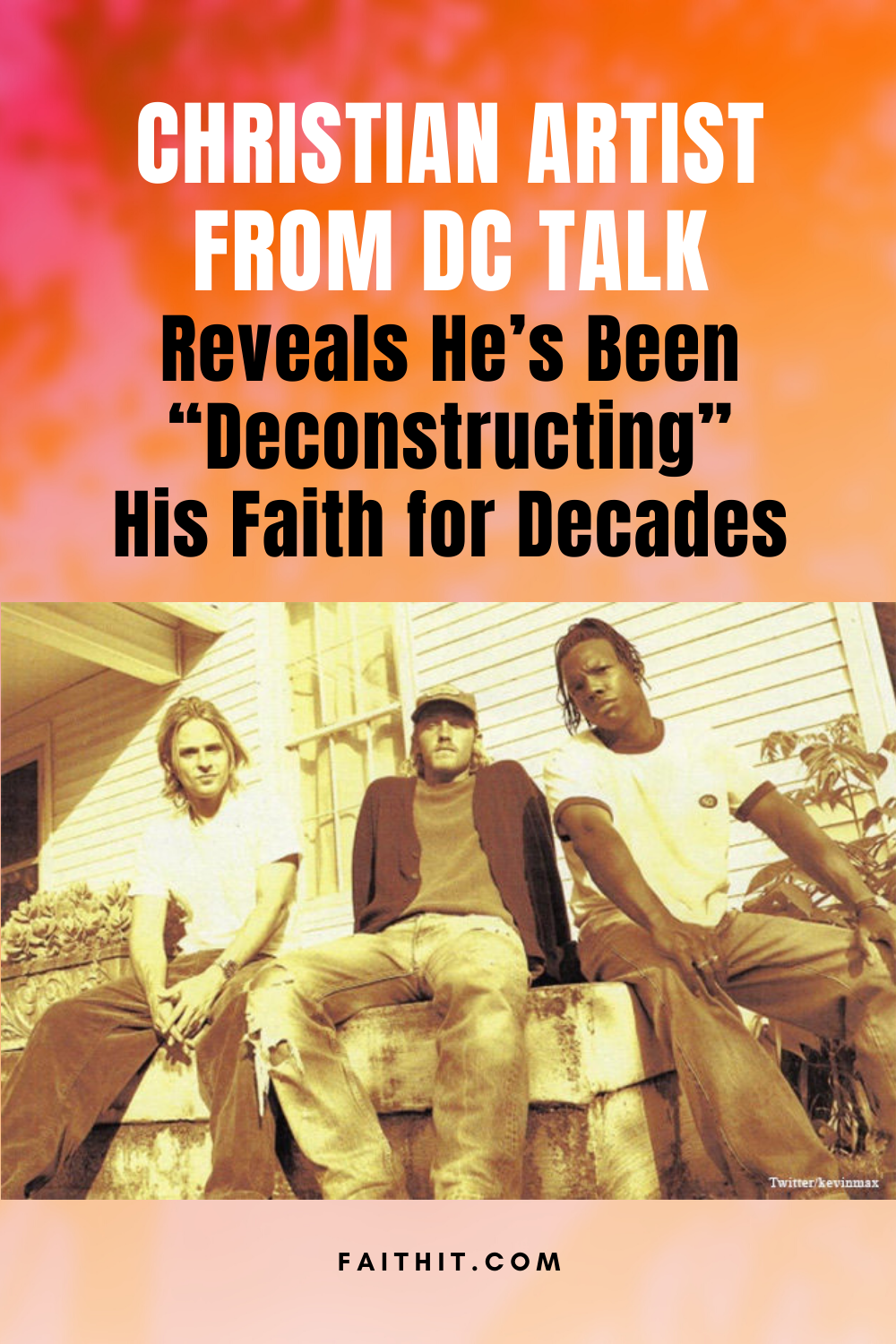 The black sheep of Christian music’s Grammy Award-winning trio DC Talk, Kevin Max, has revealed to his followers and fans on social media over the weekend that he has been deconstructing his faith for decades. The 53-year-old singer called himself an ‘exvangelical,‘ a term used to define someone who has left evangelical Christianity.

The tweet caused some confusion leading some to believe he wasn’t a Christian anymore. To clarify, Max says he’s still a Christian and told people to “read text carefully” then reassured his followers, “I still follow the Universal Christ…I have no idea how many peoples blogs or podcasts are using that announcement for further division, but I’m here for The Grace.”

Max’s post read, “I’ve been deconstructing/Reconstructing/progressing/whatever you wish to call it for decades, I’ve been in the outsider/misfit/seeker club for a long time now…Thank you for welcoming me in, but I’ve always been here.” He later posted, “Hello, my name is Kevin Max & I’m an #exvangelical.”

The ‘Jesus Freak‘ singer seemed to take offense to Christian outlets reporting on his revelation to his followers, saying, “For all those people using my post as plug & play for your own hot take or personal discourse, I offer the lyrics to an upcoming song off of my new band @AstronautsSad album ‘Adult Fears’ titled: ‘it’s okay’…. I’m sorry for being obtuse or difficult but it’s a process…love.”

The lyrics from Kevin’s upcoming song reflect some of his deconstructing journey, which reads:

It’s okay to be estranged from everything you were taught.
And it’s okay to unpack all the hopeless baggage that you bought.
I know the sun, it never shines in the same place twice.
And I know that life is better with a trusted vice.
But you will change when you cave to the universal Christ.

“I don’t think the God that I believe in is just all the sudden Going to ignore me because I don’t believe every single thing that’s written down somewhere.”

He specifically called out The Christian Post for an article about his deconstruction, and responded by plugging his new band Sad Astronauts, which he says lyrically reflects his current faith journey. Max said, “So now that ‘The Christian Post’ decided to write an article on my tweets, I’d thought I’d let you know I’m truly progressing forward & deconstructing rock and roll with my new band @AstronautsSad join us! KM”

“I’ve always felt like this,” Max said, and added his reasoning for telling people he’s been deconstructing was “so certain people can feel comfort.”

“Where I am at right now is, I’ve really just kind of gone on a journey to find out what I truly believe by reading a lot, thinking a lot, and keeping my eyes and ears open. I’ve definitely been pretty vocal about my thoughts online, and it’s met with some people that just don’t agree with me, which is great.”

Max explained, “I’ve always told them I’m a believer, but I’m questioning a lot of things and I’ve got more questions than answers.”

‘Jesus I Love You But Your Followers Freak Me Out‘ was a song Max wrote for his Radio Teknika album, and in it asks God:

“As a member of DC Talk, to write a song [like that] was great because I meant it,” Max later said.

When asked what he what he’d say to someone deconstructing his or her faith, Max said, “I would just suggest that they continue to be open learning and to changing, and progressing.” He said if people give into the fear of asking questions that might lead them to no longer believe what they once did, “You’re giving into the same fear that kept us from progressing as people so long.”

Max said “totalitarian fear” that resides in many evangelical churches “has made people regress over time.”  He encouraged those deconstructionists listening to the interview to embrace what they’re going through.

“If they’re a believer, they should have these deep conversations with the God they believe in…really struggle with it, talk to Him about it,” he said. “I believe in the God of the universe and I believe he can hear me. That in itself is just plain kind of crazy, but if I believe that then I truly believe that he cares about my progression and asking questions.”

Paul Maxwell and Abraham Piper Are Deconstructing as Well

Former Desiring God contributor and Christian author Paul Maxwell released a video in April 2021 sharing that he is “not a Christian anymore.” Maxwell told his Instagram followers that he “can’t wait to discover what kind of connection I can have with all of you beautiful people as I try to figure out what’s next. I love you guys. I’m in a really good spot…I love my life for the first time…and I love myself for the first time.”

Abraham Piper is the son of well-known theologian and evangelical preacher John Piper. Abraham uses his TikTok page to post deconstructionist videos to his 1 million followers. A video called “It’s weird to make kids read the Bible” has been viewed over 866k times. Abraham stated: “You wanna know one of the silliest things about being raised devoutly evangelical? Children are expected to read the Bible.” Piper went on to compare that to ‘Game of Thrones,’ saying, “except if you don’t read it you go to hell.”

Jesse T. Jackson
Jesse is the Content Editor/Site Manager for ChurchLeaders and ChristianNewsNow. An undeserving husband to a beautiful wife, and a father to 4 beautiful children. He serves as a deacon, a growth group leader, and is a member of University Baptist Church in Beavercreek, Ohio. Follow him on twitter here (https://twitter.com/jessetjackson)