Why God Never Answered My Prayer to Make Me Straight 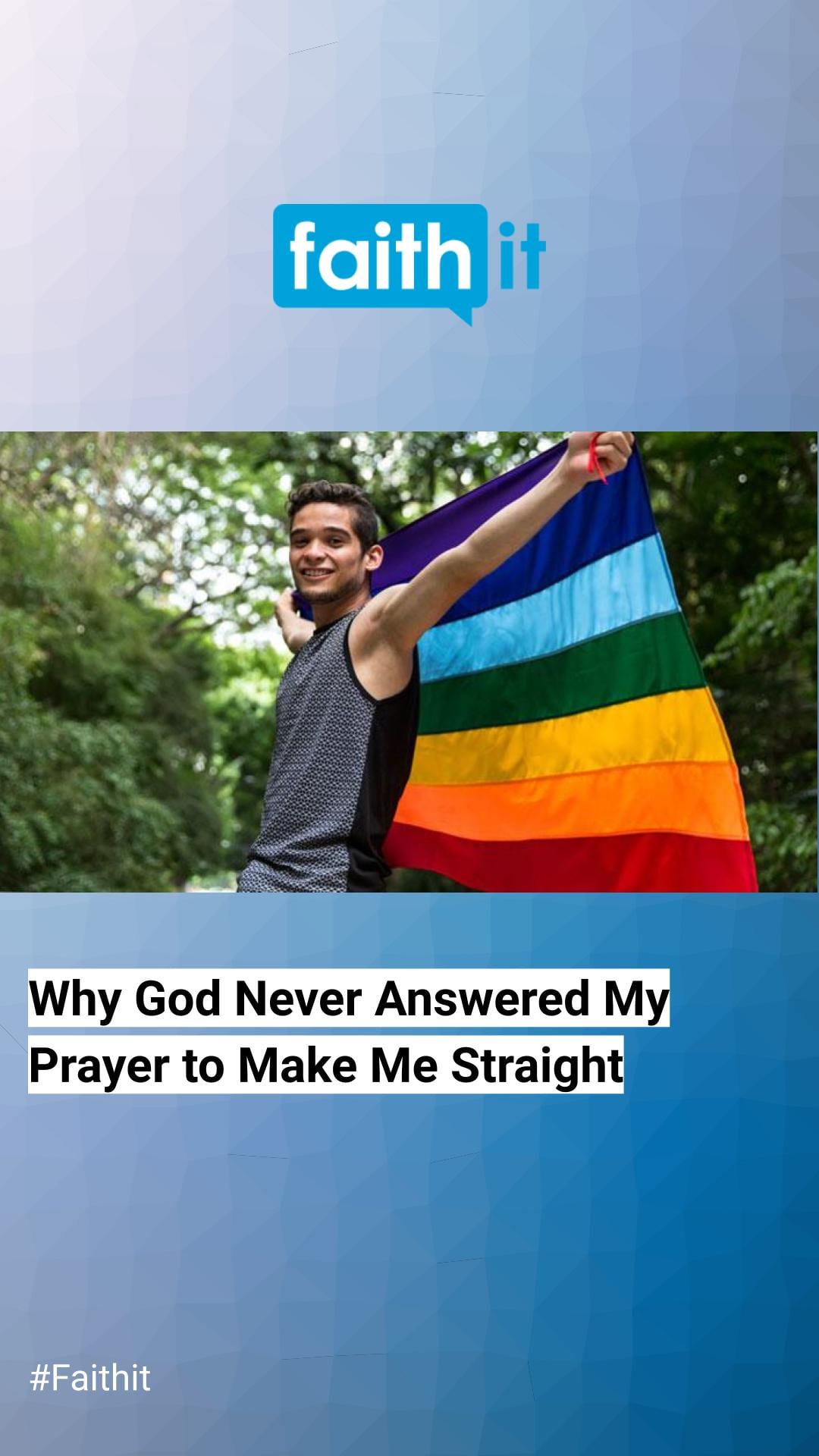 I knew I was attracted to the same sex when I was seven — in some capacity, anyway. I don’t think it’s physiologically possible to truly feel sexual attraction at such a young age. But I knew there was a drawing in me toward the same gender — and drawing that was more than what some would say is “natural” or “normal.”

As I grew up in a rural Louisiana town and teenage hormones began to surge throughout my body, my drawing toward the same gender intensified — sexually and emotionally. While I was definitely not engulfed in the life of a church during my adolescence, I was raised in close enough proximity to religious things — and religious people — that I knew the Bible referenced homosexuality as an abominable thing.

But God didn’t answer those prayers. Why?

I hear my experience repeated by others all the time. Just yesterday, actually. A Christian friend of mine was conversing with a guy who is living a homosexual lifestyle. He pleaded with her to believe that he had prayed for years for God to make him straight…to no avail. She was speechless. She didn’t know how to respond.

“Matt, why didn’t God answer his prayer? I mean, he prayed God’s will? Why was there no answer?”

I’m not God, so I can’t know all the reasons why He wouldn’t have answered this guy’s prayers to be made attracted to women. But, I do know what He’s revealed in the Bible and I do know what I now, as a believer in Jesus, believe to be true of my own “unanswered prayers” experience.

Firstly, when I grew up pleading with God to make me straight, I had no real interest in God Himself. I wasn’t praying for God to do this because I loved Him or wanted to live my life for Him. I was actually pretty unconcerned about Him, to be honest. I wanted God to take away my same-sex desires for my own benefit — so that I could fit in, be normal, be one of the guys, and even so that I could just have sex with girls like all of my friends were. Being straight would make life so much easier. So I obviously wasn’t worried about being sexually moral. I just wanted to be sexually normal.

My desire to be made straight was all about me. I had no interest in being reconciled to God or having a relationship with Christ.

Which brings me to [my] second point. From what I see in the Bible, God is far more concerned with first fixing our hearts than he is with fixing other things in our lives. Same-sex attraction included. Yes, it’s true that God hates homosexuality. But more than that, He hates that our hearts are opposed to Him and that we long to live our lives separated from Him. God’s foremost desire is that we would come to Him through Christ to receive new hearts that love and adore Him.

In fact, nothing can even begin to be done as far as the untangling of our sexualities until we receive new hearts that love and adore God. How do I know that? Because Romans 1 says that the whole reason homosexual desire even exists is due to our rejection of God’s loving rule and authority over our lives.

Don’t skip over this passage of Scripture I’m about to paste under here. It’s vital that you read it.

“For the wrath of God is revealed from heaven against all ungodliness and unrighteousness of men, who by their unrighteousness suppress the truth. For what can be known about God is plain to them, because God has shown it to them. For his invisible attributes, namely, his eternal power and divine nature, have been clearly perceived, ever since the creation of the world, in the things that have been made. So they are without excuse. For although they knew God, they did not honor him as God or give thanks to him, but they became futile in their thinking, and their foolish hearts were darkened. Claiming to be wise, they became fools, and exchanged the glory of the immortal God for images resembling mortal man and birds and animals and creeping things.

Therefore God gave them up in the lusts of their hearts to impurity, to the dishonoring of their bodies among themselves, because they exchanged the truth about God for a lie and worshiped and served the creature rather than the Creator, who is blessed forever! Amen.

For this reason God gave them up to dishonorable passions. For their women exchanged natural relations for those that are contrary to nature; and the men likewise gave up natural relations with women and were consumed with passion for one another, men committing shameless acts with men and receiving in themselves the due penalty for their error.” Romans 1:18-26.

Homosexual desire — and all other sinful desire — exists in the hearts of people because worship of God doesn’t. Straight or not, we all have sin in our hearts.

And in 2010, He did just that. He opened my eyes to see all that Jesus Christ is for those who will believe. I finally really saw Jesus as the Son of God who took on flesh and who in humility and incredible graciousness laid His life down for mine. He offered up His life to pay for my guilt in order that I could draw near to God and be given me a new heart; a new heart that loves, adores and worships the one true and incredibly good God.

Am I now straight? Am I now normal? Am I now free from same-sex desires and attracted solely to women?

My heart was changed instantaneously when I trusted in Christ and began to follow Him, but my mind was not. I wasn’t made instantly straight. I now have a heart that genuinely loves God and desires to worship Him, but at the same time, I’m still utterly messed up and damaged by sin. The Lord is working in me and renewing my mind day by day, shaping me more and more into the reflection of Him that I was created to be. But it’s been a process. And it will continue to be a process until I receive a new, perfect and sinless body in the age to come. When that day comes, the fullness of what Jesus purchased for me will be given to me: full freedom from every sinful thing that restrains my enjoyment and worship of God.

But even now, in this messed up damaged flesh, I have experienced some change in my sexuality over the past four years. I can’t deny that. And the shifting in my sexual desires is a direct result of my grace-given love for God. I’ve grown in my disgust of homosexual relations because I see what a twisting and perversion it is of the image of God. And I’ve grown in my desire for women (specifically, one woman), and maybe even in my desire for marriage because I see how a one man + one woman marital covenant so beautifully reflects the image of God.

My growing desire for women is the overflow of a growing desire to see God’s glory manifested in my life. Plain and simple. I’m not saying that I’m definitely going to get married one day. I might not. I may be single and celibate for the remainder of my sojourning in this world. But either way, I will be fine and I will be joyful because my main problem has been fixed. I might not be “straight” or “normal,” but I have a new heart, I have Jesus and I have the Father. And that’s all I really need.

**This article originally appeared on mattmoorewrites.org.

About the Author: Matt Moore is a Christian writer living in New Orleans, Louisiana, where he moved in 2012 to help plant NOLA Baptist Church. Matt spends his days drinking way too much coffee and writing about a wide variety of topics at www.mattmoorewrites.org. Connect with him on Facebook or Twitter.

Matt Moore
Matt Moore is a Christian writer living in New Orleans, Louisiana, where he moved in 2012 to help plant NOLA Baptist Church. Matt spends his days drinking way too much coffee and writing about a wide variety of topics at mattmoorewrites.org. Connect with him on Facebook or Twitter.