To the Mom at the Waterpark: Your Kids Broke the Rules When My Daughter Was in Meltdown Mode—And I’m Thankful

For Stephanie Skaggs, life is a methodical process of developing routines and calming unforeseeable reactions in her 5-year-old daughter, Baylee.

Baylee is autistic, and “mostly nonverbal,” so it’s hard for kids her age to know that anything is different about her until she has an unexpected outburst, or reacts in a way they don’t understand.

But on this particular day when Stephanie and Baylee were visiting the Kentucky Kingdom water park, two young children struck the Louisville mother in a way she just couldn’t shake.

As she writes on Facebook about their July 22 encounter, Stephanie and Baylee were “practicing very hard on waiting in line” as they made the rounds on the water slide.

“We had a routine. Wait in line.. then when we were 4 from the front, sit on the step, then down into the water then scoot up, then wait at the top of the slide for the ok to go from the lifeguard.”

Stephanie says her daughter was getting the hang of it, and with each time through their routine, Baylee’s understanding and patience increased. 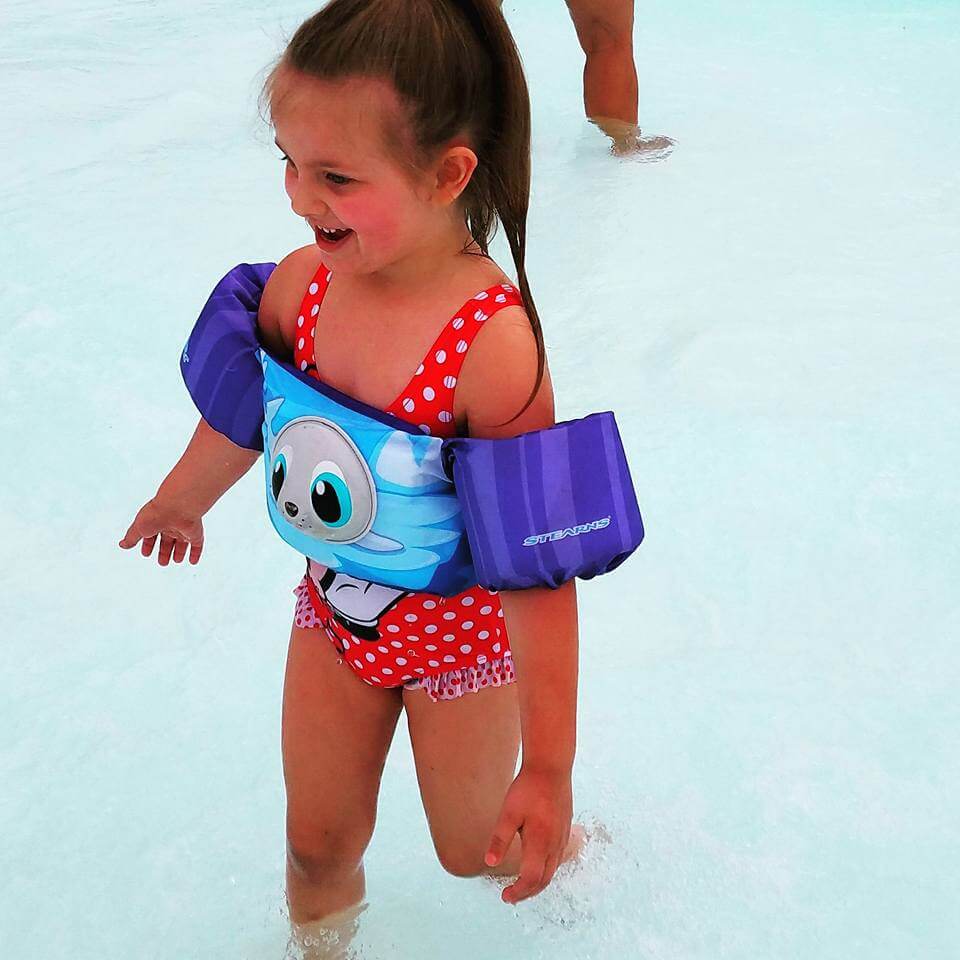 Of course, “children are children,” Stephanie writes, and it wasn’t long before another little one didn’t understand that they needed to wait in line like everyone else. For Baylee, it wasn’t so much that she cared about someone getting to the slide before her, but instead that the routine she and her mom had been working so hard on was now completely “out of whack.”

That’s where Stephanie’s note reaches its purpose. Written to “the mom in the baby water park in Kentucky Kingdom yesterday,” she explains how the saving grace came in the form of a young girl who inexplicably sensed Baylee’s frustration.

“So this happened, and as she was expecting to move up to the next step in the waiting game, and couldn’t, I braced myself for what would happen, and that is when your daughter looked up at me and said ‘she can go ahead of me.’ Baylee had not had an opportunity to get upset yet, so I am not sure exactly why she did it. I felt like maybe she could tell by the way I had been talking to her that she had special needs. It was so sweet and I told her what a sweet girl she was. And we moved on.”

Stephanie says it wasn’t long before the same situation happened again. The water park is busy, and there are kids of all different kinds eagerly stepping up to take their turn on a slide.

This time though, a young boy was in front of them and could tell that Baylee was not understanding why her routine had to be changed again. He offered his spot to Baylee.

“Again, I praised his good behavior and kindness and we went ahead, and I was struck that two different children would be so intuitive and kind. Like most autistic children, Baylee does not LOOK any different than any other child. And it’s not really immediately obvious by her behavior either. It takes some observation and usually children their age don’t realize she has autism. I guessed them to be 8-10ish.”

Later on, Stephanie saw both the girl and the boy together. Then it clicked—they were brother and sister.

She took the opportunity to approach them yet again and tell them how amazing it was that they both looked out for someone who was “different.” Stephanie says it’s small acts of kindness like these that really make all of the difference between good days and bad days navigating the muddy waters of autism.

After praising them some more, Stephanie asked the young boy to point their mom out to her.

“I made sure to let your kids know how nice it was for them to be kind and understanding but I wanted YOU to know that you are raising two wonderful children. When I came to you and told you about my experience with your kids and told you that they were super kids and you are doing a great job, you said, ‘I don’t know about that.’

Well, mom, you are. A small gesture like theirs may not seem like much. But I promise it was.”

Stephanie explains how having a daughter with autism, it’s hard to know what to expect. Though Baylee grows and learns every single day, it’s only natural to reach every scenario with anticipation and worry.

Her concerns are constant because her daughter is different “in a world that is not always kind.” She says more often than not, they encounter people who don’t immediately see how sweet, funny and smart Baylee is, and because of that, they tend to err on the side of caution and avoid going out in public as not to deal with some of those “unpleasant things.”

“Sure your children’s kindness helped in that moment to avoid a meltdown, and that is kind of a big deal for kids on the spectrum,” Stephanie writes to the mom at the water park. “But I will tell you what is an even bigger deal though, and that is that it gave me some HOPE! When I looked at those sweet little faces, filled with pride as I praised them, it made me happy to know that more moms are raising their children the way you are!”

Stephanie says though she already talked to the other mom about her kids’ behavior, she wasn’t convinced that she’d fully understood the magnitude of her children’s kindness.

She said her post, which has been shared more than 10,000 times in an effort to get it back to that terrific mom, was her opportunity to thank that woman once again, and encourage her in her parenting efforts: “You are doing a really really good job!”

Autism or not, we are all different in our own ways. Thank goodness for mothers like this one who are raising their kids to be aware of those differences and approach them with grace and understanding.

It’s a really beautiful quality she’s instilled in her young children, and one that Stephanie appreciates more than anyone could ever know.