Let’s face it. Lots of us ladies have been dreaming about the lavish, over-the-top, fairy-tale wedding since we were making veils out of toilet paper and bouquets out of our mom’s rose bushes (or maybe that’s just me).

Shehzaan and Zainab Chunara were on the same “big fancy wedding” track themselves, until a bitter reality brought them both from cake-tasting cloud 9 back to earth. Something started to make them feel incredibly guilty, and they had to get it off their chests.

In seeing the poverty plaguing the world around them, they simply could not find it in themselves to spend the nearly $30,000 that it costs for the average wedding these days.

“We began tallying up expenses and started to think it wasn’t worth putting that much money toward something that would only last a few days,” Shehzaan told TODAY.com. “We wanted to use the money for something that will have a lasting impact.”

So instead, the 24-year-old couple decided they would donate the money saved up for their wedding fund to the Aga Khan Foundation, an organization whose mission is to eradicate poverty through investing in “education, infrastructure and self-sustaining communities around the world.” 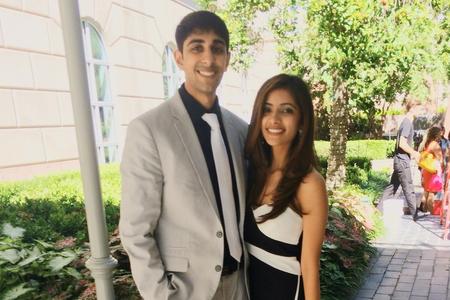 “Until you see it, you don’t know how good you have it,” said Zainab. She lived in India until she was twelve and has seen the devastating effects of poverty firsthand.

“I’ve seen poverty up close and it’s extremely heart-wrenching,” her husband added. “We felt like it was the right thing to do to give someone an opportunity to have clean water, an education and a roof over their head.”

The couple is also encouraging their guests to donate the money they would’ve spent on their wedding gift to charity as well.

On their wedding website, they wrote, “Sharing our blessing on our blessed day. We, Shehzaan and Zainab, strongly encourage our guests to replace any gift giving with a donation to AKF in celebration of our wedding.”

Shehzaan and Zainab posted this heartfelt and informative video, conveying why they decided to ditch their big wedding for a greater cause. While trying to open others’ eyes to the poverty epidemic and the privileges we take for granted each day, they also openly confess, “We’re guilty of it ourselves.”

And aren’t we all? Living in the land of plenty makes it easy to forget the plight of those who have none.

Thanks, Shehzaan and Zainab, for reminding us all that outside of our world of smart phones, fancy cars, and endless opportunity, there are millions without water to drink, shoes on their feet, and education to pursue their dreams.

If you are interested in donating to AKF on behalf of Shehzaan and Zainab’s cause, follow their donation link here.