Whether you’re 6 or 60, we can all identify with the fear of being alone. And there’s nothing quite like have nobody to celebrate with, especially on an occasion as special as your birthday.

Such was the case for 6-year-old Teddy Mazzini, who is featured below eating alone at Peter Piper Pizza in Tucson, Arizona.

Sadly, the boy waited and waited for guests that never arrived. Not even one.

Though his mother, Sil Mazzini, was aware that some of his 32 classmates could not make it to the birthday party, she had NO idea that not a single one would show up.

She had made goodie bags with invites for the whole class, and a few parents had even told her the day before that their kids would be coming.

Heartbroken for her precious little boy, she shared this photo with Tucson reporter Nick VinZant, who shared it on Facebook along with the following message:

“If you get a chance please wish Teddy a Happy Birthday. His mom sent me this after his friends weren’t able to make it to his birthday party.” 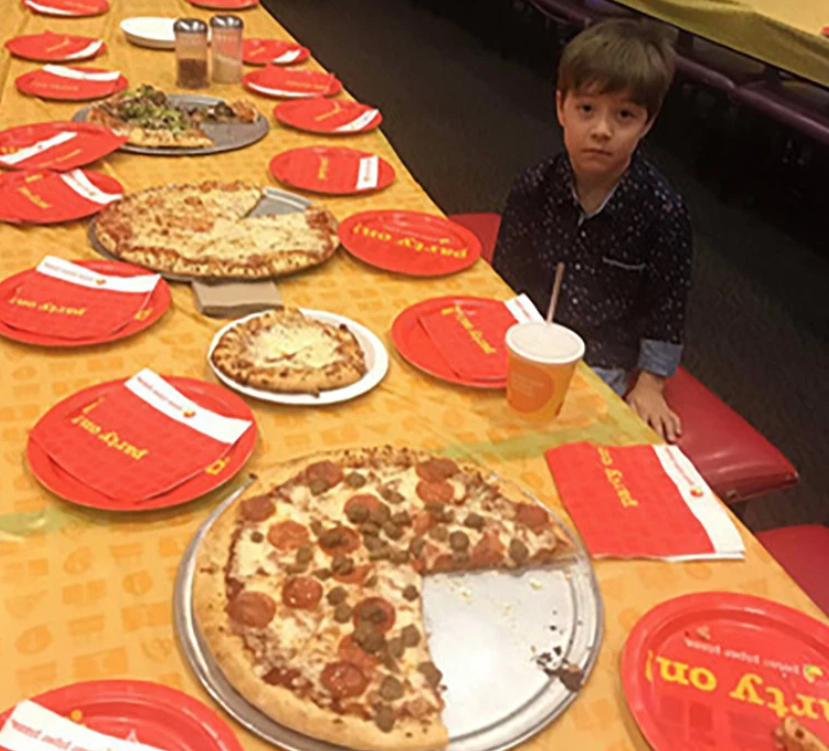 Thousands of well wishes flooded in from strangers whose hearts were also torn in two over Teddy’s brave face covering his soul-wrenching disappointment.

But that wasn’t all…

The Internet showed nothing but love and support for Teddy, including the Phoenix Suns, who reached out to offer the 6-year-old and his family tickets to their game.

The football club, Phoenix Rising, also offered for Teddy to come to their playoff game on Friday to join ‘7,000 of his closest friends.’

A spokesperson for the team mentioned that a few fans had come up with great ideas on how to surprise the boy as a special belated birthday gift.

And Peter Piper Pizza, the venue where the party was supposed to be held reported to Tucson News Now that they would bring the whole party to Teddy’s elementary school, this time including free pizza, presents, cake, balloons — and even a mascot!

According to Teddy’s mom, her beaming boy is “already smiling.”

Sil sent a brief ‘thank you’ video from her son expressing his gratitude for all the love he’s received.

UPDATE: Teddy’s mom sent this video of him. He read all of your wonderful wishes
How cute is he????
>>> https://bit.ly/2PmFpb6

But don’t let it end here. Please join us in wishing Teddy the happiest of birthdays, and encourage your friends on Facebook to do the same by sharing his story!

Inspirational
To the White Parents of my Black Son’s Friends
May 29, 2020
Relationships
“Every Day She Tags Me in Stuff on Facebook. Every Day.”: Husband Ignores Wife Tagging Him on Facebook. Now He Wishes He Paid Attention.
May 28, 2020
Relationships
7 Ways to Guard Your Marriage When Preparing for Parenthood
May 12, 2020
Inspirational
“Every Week, They Wanted Me to Abort. Did They Get a Prize for ‘Selling’ Me On An Abortion?”
May 28, 2020
Spiritual
33 Verses about Fear & Anxiety That Remind Us God is in Control
May 21, 2020
Parenting
Dear Daughter, Don’t Apologize
May 29, 2020
Browse