“When you take faith out of the public arena, when you take God out of there, people suffer, said Raven’s tight end Benjamin Watson earlier this week in a Fox News interview that rang remarkably true.

Watson argues that the double standard the American people have held on clinging to God in times of crisis but forcing Him out of schools (and the public sphere in general) during times of peace is contributing to the added violence and chaos in our world.

And it seems as though Florida lawmakers may be starting to agree per a recent bill they proposed this week that would require all public schools in the state to display “In God We Trust” in a visible place.

While lawmakers don’t think it is a fix-all solution after the Parkland shooting tragedy that killed seventeen, some seem to believe that “issues of the heart” are just as important to address as gun laws.

“It is not a secret that we have some gun issues that need to be addressed,” said Democratic Rep. Kimberly Daniels. “But the real thing that needs to be addressed are issues of the heart.”

“God isn’t Republican and he’s not a Democrat,” she added. “He’s not black and he’s not white. He is the light. And our schools need light in them like never before.”

Just one day after a measure banning the sale of assault weapons was voted against, the “In God We Trust” bill was passed 97 to 10 in the House of Representatives. 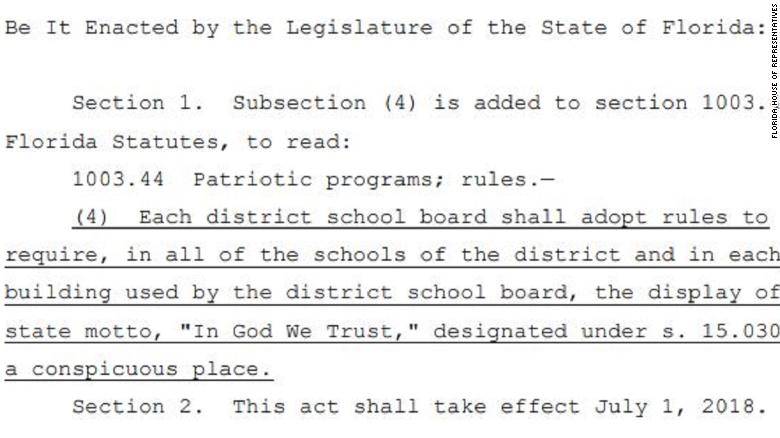 If the law is officially approved, it will take effect on July 1, 2018.