I’m going to tell you a story you may or may not be familiar with, and then I’m going to tell you exactly how you can apply the lesson to your own life. This story is about a man from the Old Testament called Joshua. I’ll bet you remember him. He’s the guy who marched around the wall of Jericho seven times, shouting loudly as God caused it to fall to the ground. But that’s not the only battle he led. He actually faced many armies on his way towards the land God had promised to Israel. The Book of Joshua is full of so many gems, so I’ll simply pass along one that really stuck out to me today. It’s good news we all can use as we face our own battles in the journey to God’s promises for us.

Following Jericho, God told Joshua of the next step. He wanted him to go take the land of Ai. I love that with every command of impending war, God tells Joshua, “do not be afraid.” That’s something we all need reminded of numerous times, not just in battle, but on the daily as we face the challenges of life. So, I like how God continues to tell Joshua not to be afraid, to be courageous, as He reminds him that the Lord God is always with him, as He is with us.

Anyway, back to Ai. God starts by telling Joshua not to be afraid, and then He delivers His promise. He tells Joshua that they will win this battle, that God Himself will deliver Ai into the Israelites’ hands. Good news, right? There’s so many times I feel (hear) God’s promises to me. He tells me that He’ll provide for my family, that He will direct our paths. Sometimes His promises are just general in nature, but other times more specific. Like when He promised provision for our sabbatical back home in Mississippi. I think we all face battles on the daily, and whether by reading the Bible, praying, or talking with a Godly mentor, we receive promises from the Lord that we don’t have to fear what we’re facing, because we don’t face it alone.

It was the same for Joshua. He knew the direction God was leading him, and he knew God promised His favor in the battle. I have had instances where I’m reading The Word, and I feel a promise from the Lord delivered to my heart. I feel so good in that moment. So confident. But the next day, when I’m trying to walk out that promise, it’s a little harder. I think that’s why God commanded to Joshua what He did next.

God had promised the conquer of Ai, but as Joshua points his javelin towards the city, he is not only commanding his army to battle, he is also walking in faith. He is following the instruction of the Lord faithfully, and he is showing in a physical sense the inner trust his heart holds. He’s pointing in a certain direction, but he’s also making the proclamation (for all to see) that he is headed that way because God commanded it. He is not afraid, and his javelin shows it.

We move to a  new city, or we take that intimidating promotion. We accept the position leadership gives us, or we agree to help out in a field we’re not fully confident in. Whether it’s coaching little league, teaching Sunday school, leading a team, or persevering through a difficult season of marriage, we walk forward in faith the things God places in our lives. We walk with confidence into the unknown because He tells us not to fear. We hold up our own javelins, even with arms trembling, and we step out, in faith. Or we should, rather.

For the sake of the lesson, let’s say we’ve all pointed our javelin with confidence (albeit shaky) towards our specific promise land. What’s next? 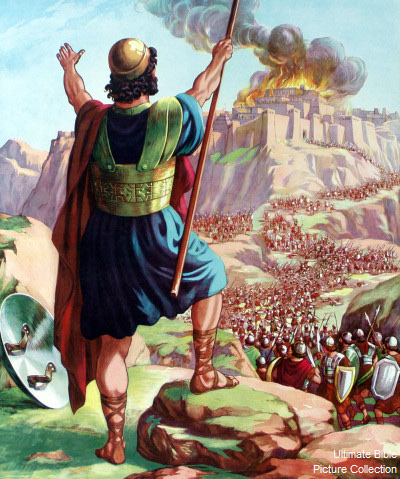 The battle, of course!

Y’all. Have you ever been in the middle of a battle, and it feels like a ten-year war? Like, there is no end in sight. Even if you know a victory is supposed to be coming, your faith can falter when faced with continued hardship. When I read about the battle with Ai, I was convinced it lasted longer than five minutes. I mean, the strategy was really cool. They lured their enemy out to the middle of nowhere, attacked the vulnerable city in the enemy’s absence, then turned around from their fake retreat to surprise the over-confident Ai in an ambush of epic proportion. It was awesome, but I don’t think it was speedy. I’m pretty sure it took some time. I would imagine there were moments where Joshua (in his humanness) worried about his soldiers. He probably cringed as the plan played out, perhaps mental fingers covering his hesitant eyes while they prepared to take the land of their enemy.

25 Twelve thousand men and women fell that day—all the people of Ai. 26 For Joshua did not draw back the hand that held out his javelin until he had destroyed[a] all who lived in Ai.

The battle had continued, the enemy had been mighty, the way uncertain, the victory not yet complete, but do you know what Joshua had not done, despite the odds? He had not drawn back his hand. He held the javelin, pointed in the direction of God’s promise, until the war was won.

He had walked in faith, but more importantly, he had continued to walk in faith even as the battle waged on. So many times we find ourselves in situations that seem endless, the victory too far away to see. We get discouraged, and we don’t want to keep going. Our arms get tired. Our fears crowd in. We begin our battle in confidence, but it’s easy to draw back our hand when the going gets tough. We don’t hold out until the battle is complete. We draw back, and in doing so, we miss the promise of victory that God had in mind.

If you find yourself in a tough situation today, I would encourage you to hold out your javelin in faith. Point it towards the promise of victory that God gives. Don’t pull back your hand when the battle drags on, but instead hold steady in faith until God declares it done. Don’t miss the victory He has promised in your life. Don’t draw back your hand until the end.

Inspirational
“My Son Was Dead, But That Blue Stain? It Remained. 14 Years Later, It’s a Reminder That ‘Things’ Aren’t Important, But People Are”
February 25, 2020
Inspirational
“Not a Cluster of Cells”: Mom Shares Raw Photos of Stillborn Delivered at 14 Weeks
February 21, 2020
Inspirational
“My Sick Wife Hasn’t Slept in 3 Days & All I Could Think About Was ‘Me Time’”: Husband Urges Other Men to Help Their Exhausted Wives
February 18, 2020
Parenting
2 Words That Will Beat the Fun Right Out of Your Kids
February 11, 2020
Relationships
To the Wife Whose Husband Won’t Say “I’m Sorry”
February 12, 2020
Parenting
What I Want My Daughters to Know About Their Clothing Choices
February 21, 2020
Browse