As the national spotlight continues to narrow in on abortion this year, a common thread of debate tossed around by pro-choicers is that of children suffering in foster care.

Many who seek to justify abortion often turn to the suffering of those in America’s foster care system, to argue that there is in fact, a need for abortion.

Students for Life of America released a video of pro-life advocate, Kristan Hawkins, tackling this argument head-on with a pro-choice supporter.

Recently, abortion advocates have been using children in foster care to justify the horror of abortion. Watch as a pro-choice student dodges the big question: should we eliminate the suffering or the sufferer?

In an open forum, the pro-choice supporter asks Hawkins why an unborn fetus, who cannot live outside of the womb, should be carried to term only to wind up suffering in foster care because it is unwanted by the mother.

“Odds are, if it goes into the foster care system, it will face severe neglect and abuse,” she poses in her question.

Hawkins, who serves as the President of Students for Life of America, responds with a poignant statement saying, “So you believe we have the right to eliminate the sufferer, and not the suffering.”

The pro-choicer denies that point arguing it’s not what she said before Hawkins repeats her question back to her in another way.

“You just said, if you knew with 100 [percent] certainty, that the child you are birthing is going to have a lifetime of suffering, that it would be better…to end the life of a child, than for the child to suffer.”

She continues, “So instead of attempting to solve the suffering of the child, you’ve just eliminated the potential sufferer.”

The woman seeking to justify abortion follows up with a different question — one that she insists is her same question — asking what Hawkins suggests we do to end the suffering, to make bringing an unwanted child into this world, justifiable. 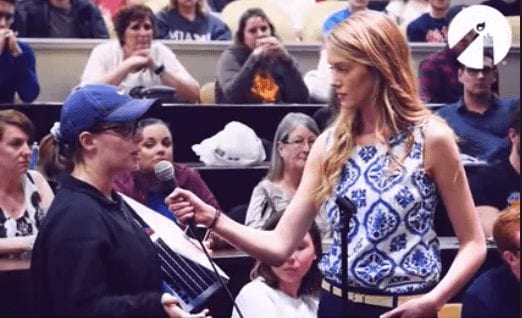 Which, is a fair question. We’ve talked a lot about how being pro-life doesn’t end with the baby being born but instead sees commitment far beyond birth. And to that point, Hawkins insists, pro-life advocates DO, like most Americans, believe something has to be done about the foster care crisis in our country.

“These are things that we as Americans strive to fix,” she says. “I don’t believe anyone in this room, regardless of whether or not you are pro-life or pro-choice, thinks that children should be suffering in foster care.”

Hawkins goes on to argue that the pro-choicer is not in fact, advocating for those who are suffering in foster care. Because as a pro-choice advocate, even though she may care, like Hawkins mentioned, about those in foster care, or those suffering from homelessness, etc., her advocacy is rooted in a woman’s right to choose, not making the lives of those in the foster care system better.

“But what you’re advocating for, is [this], you’re trying to justify legal abortion, by saying some people are going to suffer, therefore we’re going to play God and we are going to eliminate the sufferer,” Hawkins says. 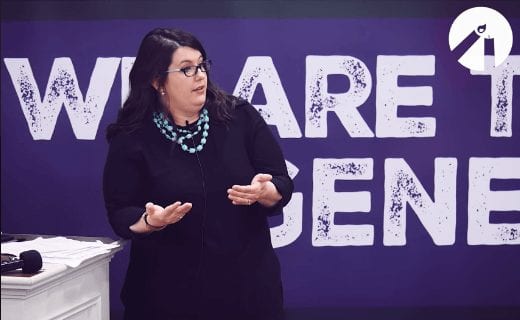 She explains that this thinking is skewed because people DO come out of adversity, and whether we’re born into an unfortunate childhood and tossed into the foster care system or not, we will all suffer in various forms throughout our life.

Inspirational
Remember the “I’ll Love You Forever” Book? The Real Meaning Will Rip Your Heart Out
August 9, 2022
Inspirational
Dad Breaks Down as 2-Yr-Old Daughter Is Denied Entry on Plane— Woman Points at Toddler & Says “I Wanna Buy Her Ticket”
August 8, 2022
Relationships
Husband Is Asked if He’s Bored of Being With His Wife of 10 Years—His Response WINS The Internet

Relationships
“Before Them, It Was Us”: The Case for Putting Your Wife Before Your Kids
August 10, 2022
Relationships
To My Wife of 16 Years, Here’s the Secret I Wish I Knew Before Our Divorce Papers…
June 22, 2022
Parenting
‘You Hold on Tight. Somehow 20 Years Isn’t Enough. When It’s Time for Them to Go, It All Hits You Like a Ton of Bricks.’
August 4, 2022
Browse