The pro-choicer then insists again that she’s reiterating her initial question, which now has literally nothing to do with advocating for legalized abortion — asking, “how do you propose we solve those problems for the children that are suffering?”

Remember, she began [by] asking why a woman should be required to carry an unwanted child to term if they’re just going to wind up suffering in foster care anyway.

And Y’all, Hawkins is NOT having it.

She says this is a common thing we hear in the pro-life moment, that after a child is born, pro-lifers don’t care about women or the children. But, she argues, in order for anyone to be “Pro-Life” in this way, you’d have to also be actively working for 30 different things.

“Exactly,” Hawkins explains. “I am anti-abortion.” 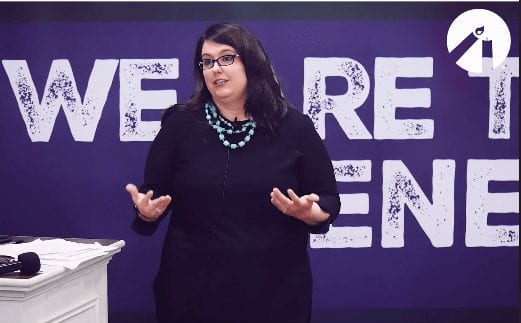 As the video continues, the student continues to press her question about what Hawkins and the pro-life movement are doing to care for those in foster care, further demonstrating that she doesn’t even know what she’s advocating for at this point.

“These are great problems that we face in our nation,” Hawkins says of homelessness and foster care. “These are dilemmas that we face, and there’s [sic] different policy prescriptions for how to solve those things. But my organization, my mission is very limited, it’s to abolish abortion. To make abortion illegal and unthinkable because abortion is the greatest human rights tragedy our world faces.”

She continues, “There’s no act of violence that kills more people every single day in America and across the world than abortion. There’s nothing wrong with me fighting and spending 100 [percent] of my time doing it,” she says. “Just like how there’s nothing wrong with the American Diabetes Association putting 100 [percent] of their money, research and time behind curing juvenile diabetes. No one ever accuses the Diabetes Association or the American Cancer Association of not trying to cure every life-ending disease.”

Hawkins says it’s a collective understanding among all people that in order to be effective in achieving your goal, you have to remain “laser focused” on that goal.

She closes by standing up for many pro-life advocates who are actually foster parents or leading the charge for adoption, and emphasizes that it’s not a question of “what else.” It doesn’t matter what she or her organization IS doing for all of these other efforts, because the entire purpose behind that question is simply to stop the discussion from happening.

“Abortion is a moral wrong, and it should be stopped,” she says.

Parenting
Mom Urges Parents to See This X-Ray After Family BBQ Lands Her Son in the ER
May 27, 2022
Browse